Thessaloniki was amazing!  I had most of a day to explore the city before the conference started.  I had no trouble getting around and the Greek people were amazingly helpful.

Inside the down of the Agia Sophia church.

I was lucky to be exploring the city on a Sunday because all the churches were open for celebrating mass.  I observed christenings in two different churches–one that has a basilica (Christian cross) plan and another with a Byzantine cross plan (where all the arms have equal length). The basilica plan is typical of Roman planning (of Roman Catholic heritage) and the other (like San Marco in Venice) is typical of Greek Orthodox planning.

This area was under control of the Ottoman Empire for a period of time, after it belonged to the Roman Empire, and the Ottomans worked to convert the Christians to Islam.  There are Roman and Byzantine scattered artifacts throughout Thessaloniki.

I missed the actual baptism and anointing, but after that a team of women dressed the baby head to toe. Here the parents presented the fully-dressed child.

I particularly enjoyed visiting the Greek Agora (which became a Roman Amphitheater during Roman occupation of the area) and the Museum of Byzantine Culture.  I had visited the Museum of Byzantine Culture for just an hour on my own, so I was thrilled when the conference included a dinner plus tour there as well.  I felt like a kid in a candy store!
I’m not one to dwell on negatives, but I will mention a couple of oddities of my stay in Greece. There were two bus loads of riot police parked in front of my hotel the entire time I was there.  One week prior to my arrival, the police had reclaimed the building a few doors down.  It had been held by a group of anarchists for the past five years.  I could see burn marks on the underside of the balconies of the building as I walked by. 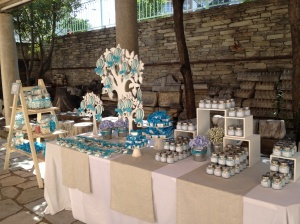 All set up outside for the after-baptisim festivities.

In the past, I had heard that the riots I’d witnessed in Rome were organized by anarchists from the Balkins, and not by Italian people.  I’ve been in or near Rome for two, both of which were in response to visits by President Bush the second.

I can’t vouch for the accuracy of that claim, but it certainly seems possible to me now that I’ve seen the anarchists in action in Greece.

Despite the potential for chaos, I felt quite safe everywhere I went in Thessaloniki, even when I was out by myself.  However, I didn’t get a chance to visit the oldest part of the city where it’s acropolis is located, so I can’t speak to the atmosphere of the whole place. But my hotel was allowing the police to use the facilities from time to time, and things felt stable enough to me.

I love to see depictions of saints holding models of churches. This one appears to have a Byzantine cross plan.

There was also some sort of transit strike on the morning I left. I had to take a cab to the airport instead of city bus, and my flight to Rome was delayed for an hour.  After we finally landed in Rome, the folks at the airport forgot to deliver one buggy of luggage to the baggage claim.  That delayed about 40 of the passengers, including myself, for about another hour.  I helped get that sorted out by alerting the airport personnel to the problem.

Each time they enter the church, they visit each important relic. And kiss each and every one!

Overall, I was amazed at how orderly the others on the flight were in loading the plane and, later, waiting for luggage.  Several of them even waited for my luggage–the very last of the set–to emerge before they set off for the city.  They went out of their way to make sure I was okay!

In the interim, I had helped people make their connections by providing advice on how to have baggage delivered directly to their homes.  It was great to be of assistance!  (It wasn’t the first time I awaited lost luggage in Rome.) 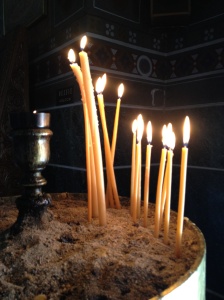 I lit a candle in honor of Dave’s dad.

The flights themselves were great.  I managed to get window seats on three of my four flights. As I write this, we’ve just flown over the Ligurian coast of Italy (where Dave and I spent a week this past summer).  I must admit that the mountains that looked so scary from the passenger seat still look scary!  We blew a tire when we accidentally went off-roading.

On another note:  it feels terrific to know the landmarks of Italy and of Rome well enough to get around without a map.  Yesterday, when the busses of Rome were detoured around the city center, I was able to help many tourists find their way.  I don’t even need a map for getting around Dublin, because I spent so much time apartment shopping on line before I arrived!