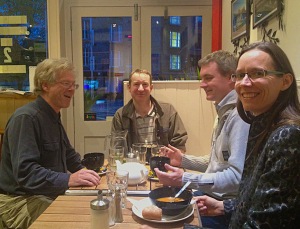 Tea with Richard Hayes, Gavin Duffy, and Brian Bowe after the College Education Seminar wrapped up.

Happy Halloween!  I just got a call from Trish Long, who leads Disney’s branch here in Ireland.  We met at Zumba class at the elbowroom a couple of weeks ago.  She called to invite me to RTÉ Concert Orchestra: Psycho – Live! Hallowe’en Night at The National Concert Hall in Dublin.

What an awesome way to follow up yesterday’s seminar and last night’s musical evening at the Cobblestone.

At the Cobblestone, I got to hear Tom’s brother, Alfie, play alongside three of his kids.  Alfie’s daughter (seated to the left in the video) is studying Medieval Irish History and Architecture. She’s a student at Trinity College, and an excellent candidate for a Fulbright, I’d say. 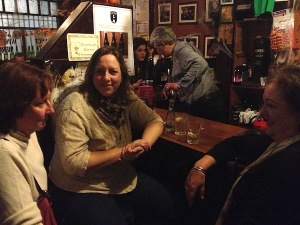 Enjoying music and good conversation, with Nancy Stenson, Susan Early, and Joan Cahalin. Tom Mulligan is there, too, in the background.

Just as a crowd of instrument-carrying appeared to join Alfie’s family in the musicians corner, a bunch of my friends showed up, too. I spent a lovely evening talking with Fulbright Nancy Stenson and architects Joan Cahalin and Susan Early.

Nancy and Joan both have degrees in linguistics, so we got to discuss Nancy’s research (she’s diagnosing where students have the biggest problems with Irish pronunciation in order to help teachers teach Irish more effectively). Nancy has authored several textbooks on Irish language already, though she never mentions it herself.  I always do–because it’s fascinating!

When they left, I visited with three generations of a family from Brooklyn who are celebrating birthdays this week (one turning 21, one 50, and one 92)! They were there along with a relative from Dublin. I can’t believe how good life has been to the lot of us!