Esther loves musical productions.  Surprisingly, she wasn’t much interested in seeing plays while she was here.  That’s because English is her fifth language and she was worried she’d have trouble understanding.

And while she was here we painted the town red!  We soaked in all these musical performances during her one-week stay in Dublin:

Esther has just left for the airport, and things are now quiet and still. I’ve got mounds of work to do and yet hundreds of memories of this past week that I still want to share with you.  I hope to find time to post more for you in the coming days.

Gavin (far left) and his brother, Aidan, are among the musicians who play at Hughes Pub on Monday nights. Esther (far right) was soaking in the melodies.

Logo from the musical “An American Idiot.” 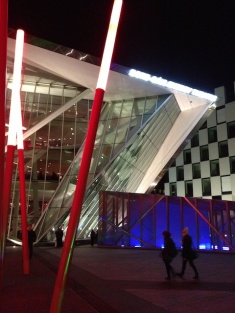 Reflection on the Theater facade. 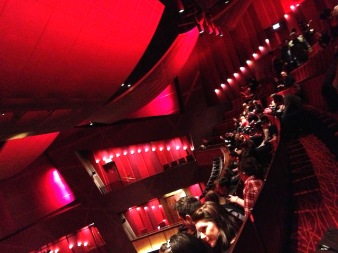 Inside of the Bord Gáis Energy Theatre in Dublin designed by Studio Daniel Libeskind. 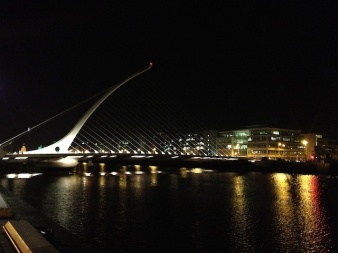 Gavin (far left) and his brother, Aidan, are among the musicians who play at Hughes’ Pub on Monday nights. Esther (far right) was soaking in the melodies.

This musician was at the Achill Island St. Patrick’s Day parade that Glen McClure photographed last March. He knows many people in Glen’s photos.

The American Embassy threw an election-night party with All-American flair. 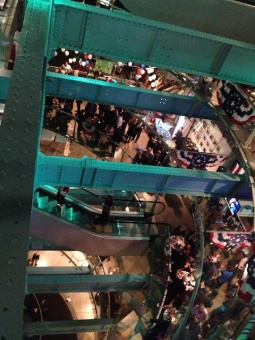 Election Night at the Guinness Storehouse.

An election night discussion led by a lecturer from Trinity College Dublin.

The Ambassador to Ireland spoke to us from Pittsburgh on election night.

Poster from the opera “Hansel and Gretal.”

Shannon and Esther after the opera. 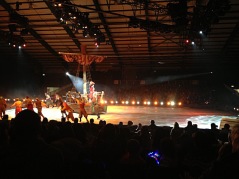 Captain Hook got quite bossy in Disney on Ice.

Scenes from Passport to Adventure a Disney on Ice production.

I finally got to hear Tom’s brother Neil play the pipes last night. My camera didn’t have any juices left, so I downloaded this photo from http://www.chuckbrodsky.com, but all these guys were at the Cobblestone last night.