I really love my job and yesterday was an exciting back-to-school kind of day. I crisscrossed the town many times.

My day started with two-hour a Construction IT Alliance (CITA) meeting/mini-conference where we learned about how Ireland’s national power company uses Building Information Modeling (BIM). Several of my colleagues from DIT presented and were involved in organizing the event. It was held in the beautiful National College of Physicians. So even though I missed seeing the beautiful sunrise that Aongus photographed for me yesterday on his way to work (shown below), I still had beautiful sights to see.

And as I raced from the CITA meeting across the city to DIT’s new campus at Grangegorman I saw even more from the top floor of a Dublin Bus. I hadn’t much time to get to the photo shoot for the upcoming issue of ResearchNews, published by DIT. This trip, my second of the day by bus, proved more thrilling than the first, as I had a much better view and more space than at rush hour.

The bus was efficient, and I enjoyed a little walk on our new campus before the shoot. It would have been a 45 minute walk, but the bus ride took just 20 minutes. The campus is lovely. Oddly, the irrigation system was running full-force. I say oddly, because the cloud cover was dense and ominous. I guess we have plenty of water here on our very green but very drizzly island.

The wind took a toll on the outdoor portion of our photo shoot. The windblown look on 15 of DIT’s highly-accomplished female researchers could make for an interesting cover photo.

Fortunately, one of the teachers in the shoot gave me a lift across town to RoboSumo lecture and lab.

This was our first day of RoboSumo this year and I had a ball. In fact, I’m starting to feel more confidence being myself and taking the lead from time to time in this classroom.

It took me a couple years teaching at Hampton University before I acclimatized there as well, and I’ll say that it’s exhilarating when you finally start to hit your stride. This is the start of my second year of full-time teaching here at DIT. Before that, I was in full-time research roles where I occasionally volunteered to teach. I’m loving being back in the classroom! And I feel like I made a positive difference being there yesterday. Like some of the interventions I made will have good effects for team participation. I think much of the effort and advice I put in helped students. I really look forward to RoboSumo this semester, and working with my colleagues (especially Ted and Catherine) and students in a Kevin Street.

After lab, I hoofed it over the Bolton Street to assist Avril with orientation (here it’s called induction) for the class of Postgraduate/Masters students starting our MSc in Applied BIM Technologies. I had a surprisingly good time giving tours to the new students and getting to know them.

Running into my dean, as I was leaving the building at 9 PM with my personal escort and bodyguard (Aongus), was a nice way to cap the day. My dean (Prof. Gerry Farrell) is always interested and supportive, and even he remembered meeting Aongus last spring when we were out with electrical engineering colleagues. Aongus and I were both impressed and touched that he remembered after the whirlwind BBQ day he’d had.

Likewise, I have been touched by the kindness of my line managers over the past few weeks. My family faced some major challenges, because my mom needed emergency surgery when she was touring Ireland. Dr. Avril Behan and Dr. Kevin Kelly couldn’t have been more kind as I helped get my mom through surgery, recovery, and return to the USA.

All in all, I’m thrilled to be starting a new semester here at DIT. Anyone who has moved country or made a major career shift will understand what it’s like to break through and feel like you’ve found your niche and you belong. Yesterday, I wasn’t walking on eggshells. I felt like I was flying with eagles. 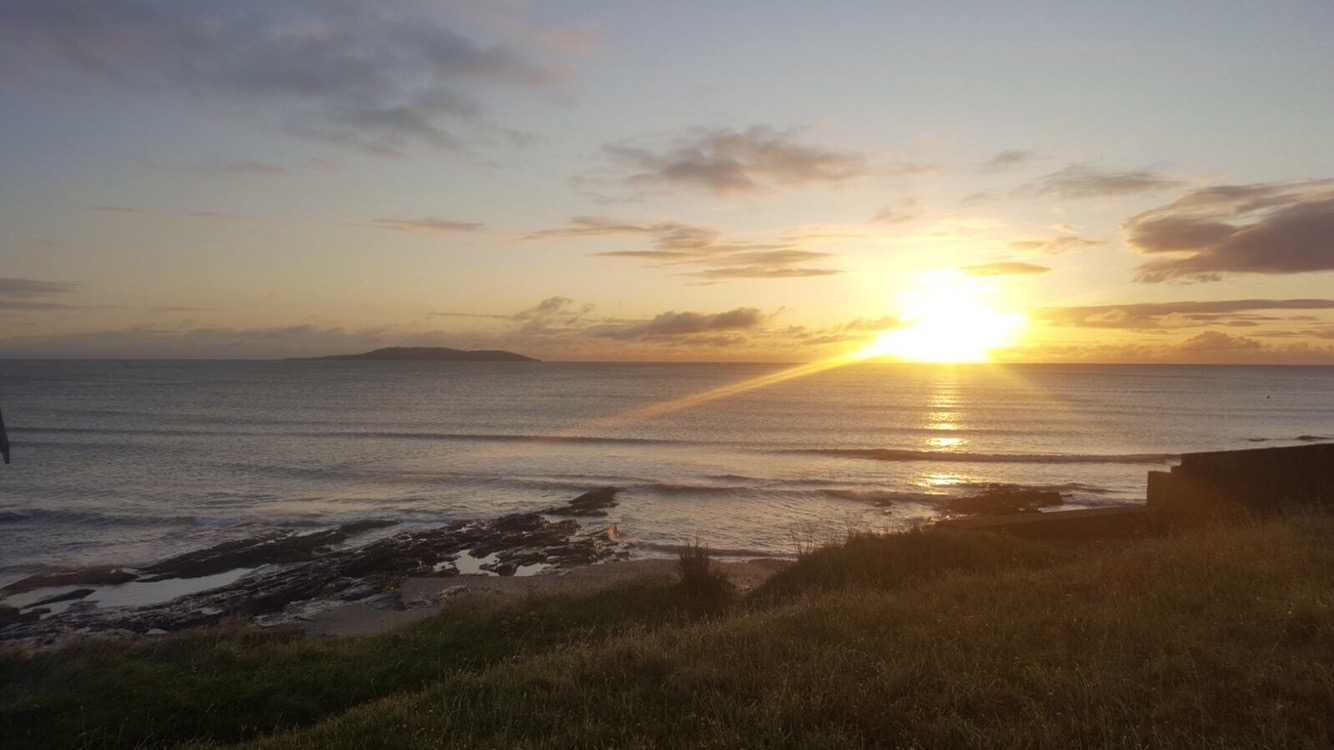 Malahide sunrise–good morning photo sent to me by Aongus Coughlan

Lobby of the National College of Physicians on Kildare Street

The room was filled to the brim with BIM enthusiasts. (It was slightly claustrophobic, actually!) 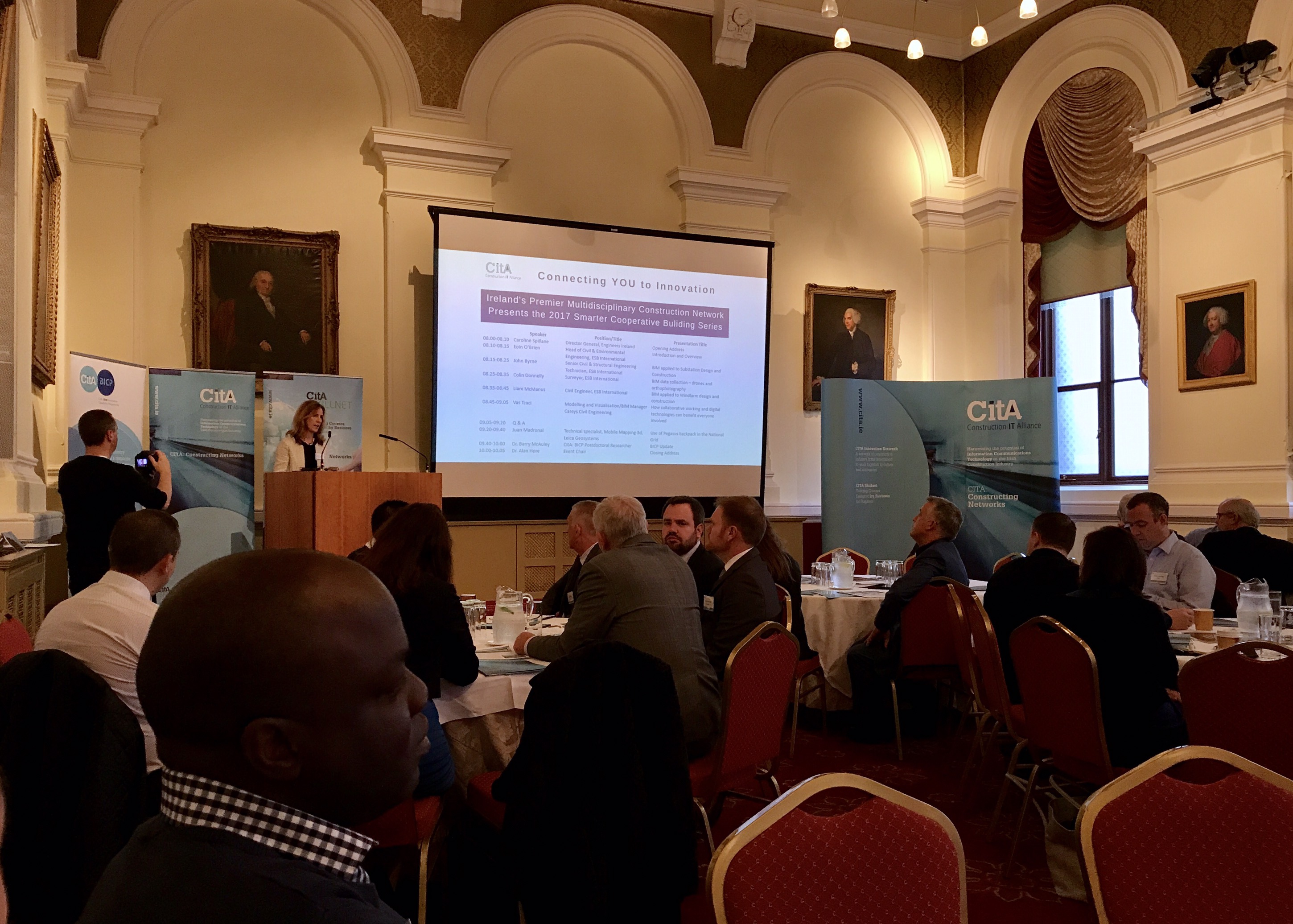 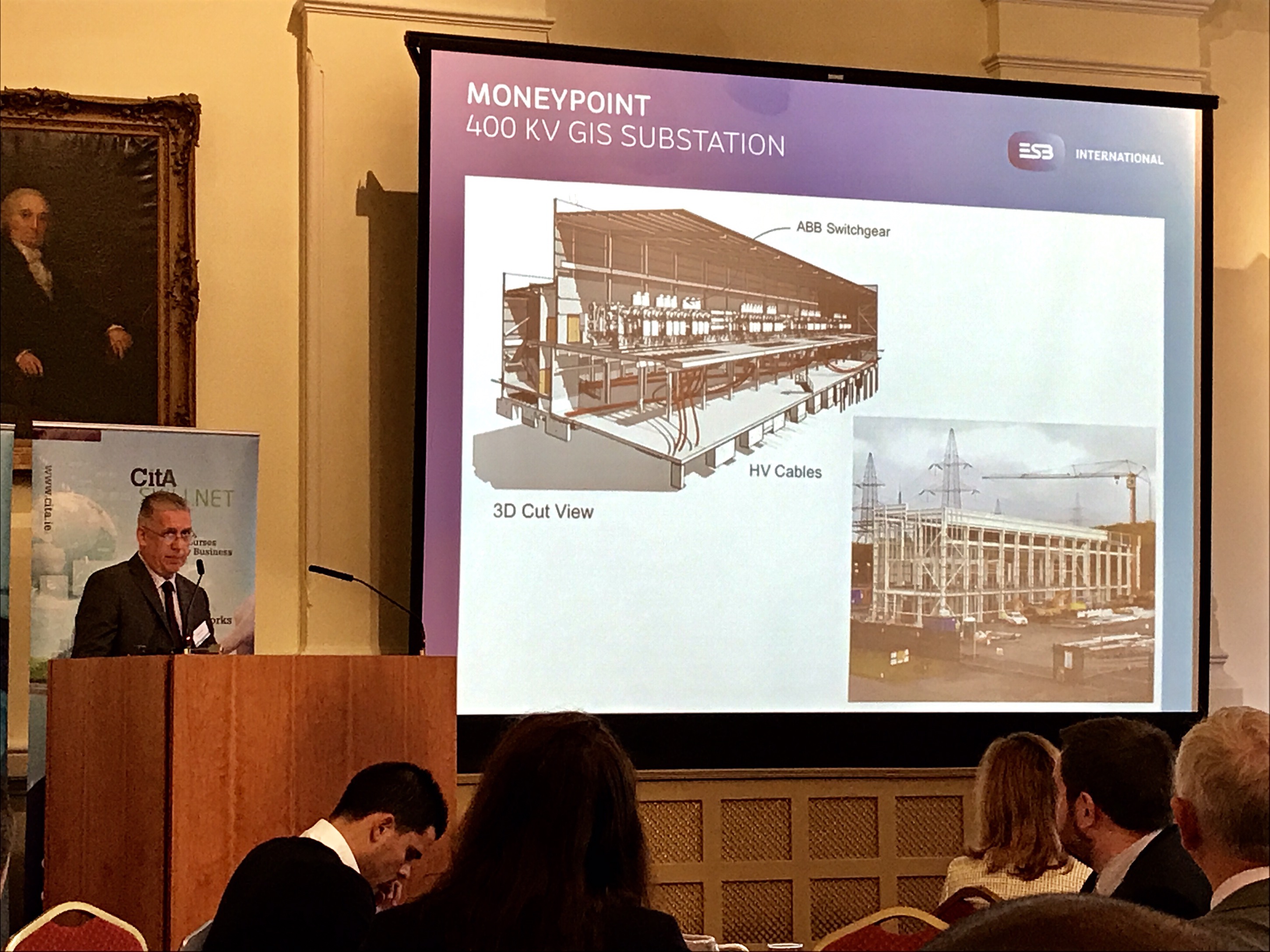 ESB uses BIM for planning, and also for communicating

We learned how ESB uses BIM in building and operating windfarms 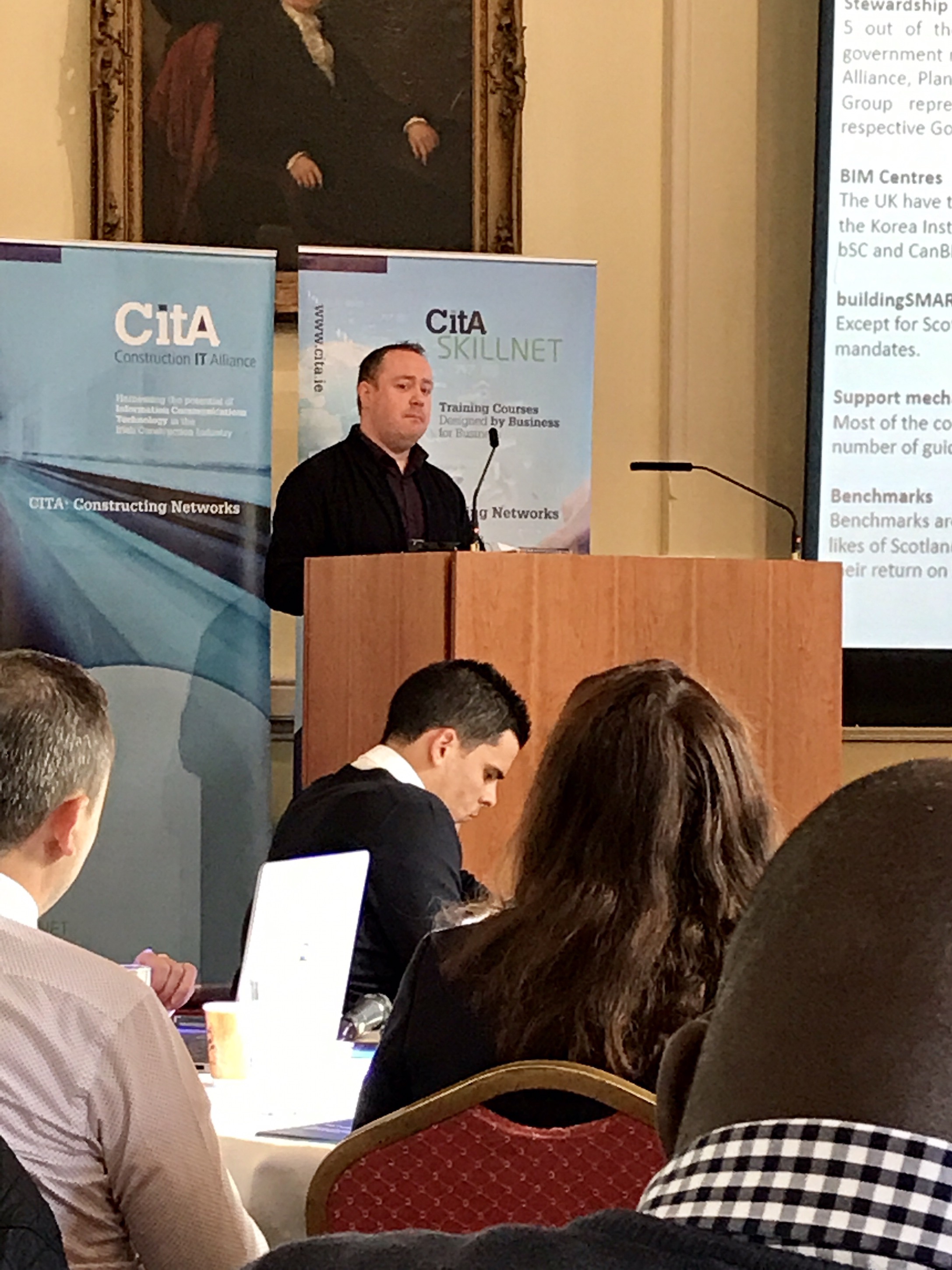 Dr. McAuley, my colleague at DIT, was speaking on behalf of BICP

While I was waiting for the bus, I found this backdoor to Trinity. There’s always a back-door into a college…..

…but a great view from the double-decker bus. 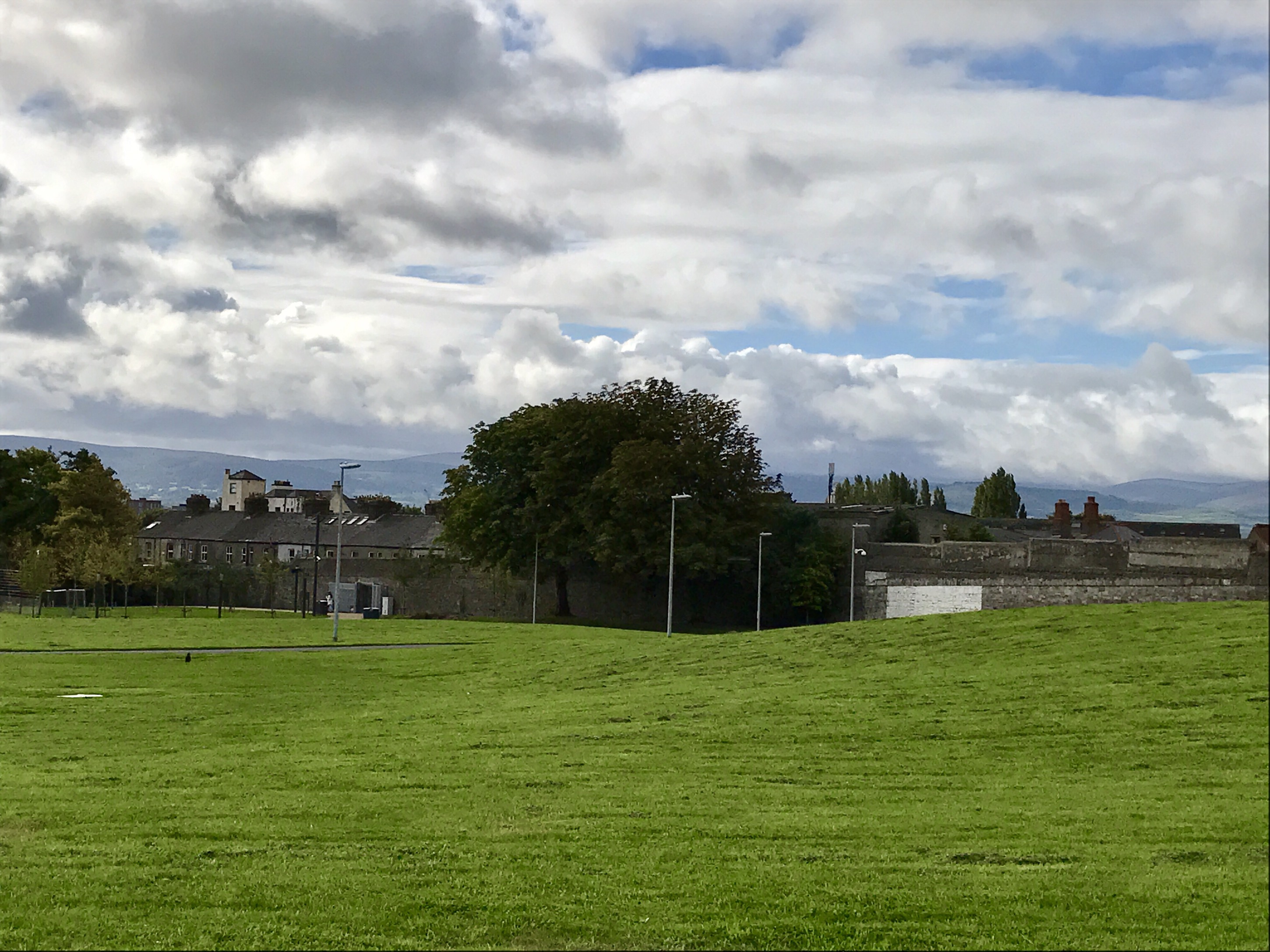 DIT’s research building, the Greenway Hub, is shown here to the left

A DIT Chemistry teacher, Catherine, has joined us in teaching the RoboSumo lab. We are glad to have her on the teaching team!

We also had a good time with icebreakers before forming teams. Icebreaker got the students talking to people they hadn’t yet met. Sometimes my years as a camp counselor come in handy!

When I don’t know the exact answer, I sometimes find a student who has got that particular type of problem sussed out to help!

Here’s Dr. Avril Behan running induction for the Postgraduate programs in BIM. We also lead the new students on tours of Bolton Street and Linen Hall.

The first year students have arrived at DIT and are getting orientation this week. Today, the whole group of incoming engineering students were at our Kevin Street campus to learn about electrical and electronics aspects of their first year curriculum. Dr. Ted Burke led the introduction. 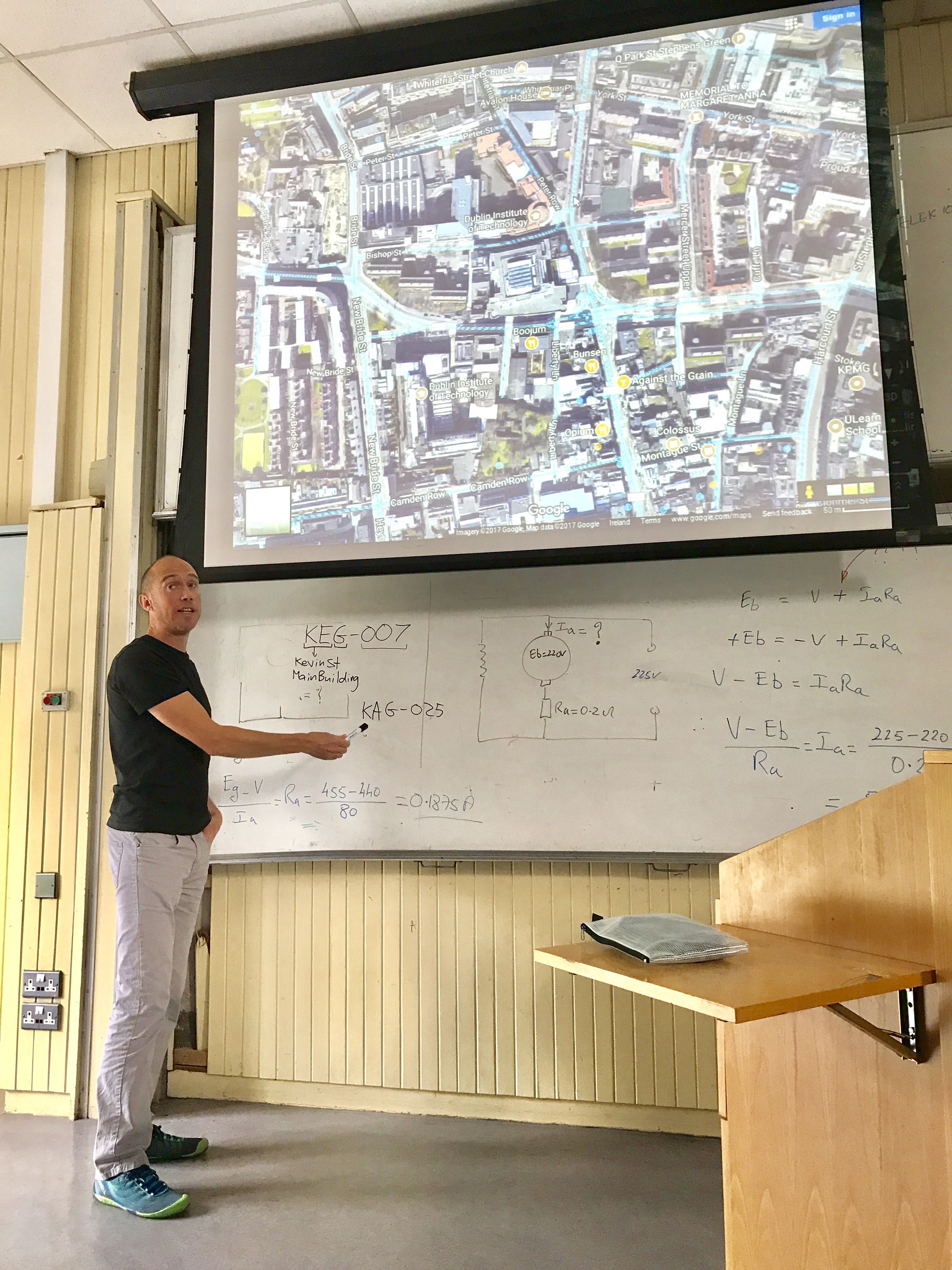 I really enjoy the chance to teach in various programs and on multiple campuses of DIT. I’ve posted images from my morning walk from DIT Bolton Street to DIT Kevin Street.