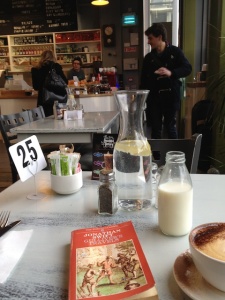 A good “third space” helps fill the gap left between your home (your first space) and your workplace (your second space).  It should be a place where everyone feels welcome and equal–regardless of income or social status.

I learned about third spaces from one of my thesis advisees at Hampton University, Ryan Kendall, who asserted that we lack adequate third spaces in the USA.  He proposed to transform our beautiful (but increasingly vacant) Post Office buildings into vibrant spaces. He wanted them to be used for socializing, learning, developing physically, and yes, mailing things (in old- and new-fashioned ways). Prior to his thesis year, Ryan worked at NASA Langley. That happened the summer after he completed the Comprehensive Design Studio that I taught alongside Robert Easter. Ryan was a smashing success with NASA.  And the NASA folks have kept coming back, asking for more and more HU interns and for our department’s help on various design projects.

Ryan Kendall in his job at NASA Langley.

In the States we often neglect our third spaces… or fail to create them all together.

I’ve found that fostering “third space” is a core tradition in Ireland.  The pub has long served this purpose.

When Dave and I visited Ireland in 2003, we saw entire families spend their evenings engrossed in meaningful conversations with neighbors and friends at the various pubs we visited.  Kids ran in and out and people of all ages mingled happily and comfortably.  Although pub culture is not as strong today (the smoking ban took a tool on the pubs), it’s something you can still find in many places.

Third Space: changing the city around the table. 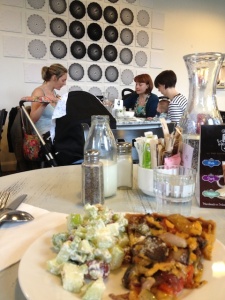 Bring some friends. Enjoy the art.

A webpage for the Third Space restaurant explains:

Our story starts in the changes Dublin saw in the “noughties”. Lots of new apartment blocks, lots of new offices and retail units – no gathering places. Living space and working space but no “third space”.

Re-introducing such places into areas that lacked them became a passion for a small group of people. And so was born Third Space. It is a social business venture to open and run eating and meeting places in the areas of Dublin that lack community hubs. With a simple and great menu and an informal friendly environment, they will have a creative buzz that connects into the varied life of a modern Dublin neighborhood.

I had an interesting encounter at both of my “third spaces” this week.  I’ll post them,  so you can see what I mean. Stay tuned! (Click here to read the sequel.)

Grab a lunch. Everyone’s welcome and they’ll make you feel at home… even a barrister (i.e., lawyer, shown to the left) can find a quite place to reflect on the day, away form the busy halls of the Four Courts.