At Trim Castle with the 2012-13 Fulbrights to Ireland and their families (on 7 September 2012). Try playing “where’s Waldo?” and find Dave, Heather, and me.  You’ll also see the pipers (Jonathan and Amanda), Erin Eife, and many other folks I’ve blogged about.

There are so many things I meant to share but haven’t had the time to post.  This is one of them.

These are photos that Fulbright Communications Officer, Joanne Davidson collected during our September 2012 Fulbright orientation events.

I hope they’ll give you the feel for some of what we learned.

Colleen Dube, the Head of the Fulbright Commission in Ireland, orienting us all (on 6 September 2012).

Learning Irish with Sioban, a former Fulbright to the USA and the niece of the Cobblestone pub’s proprietor, Tom Mulligan. (Photo from 6 September 2012.) 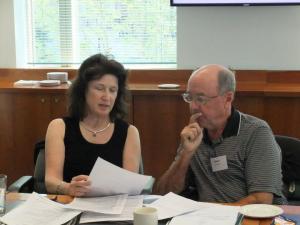 Ann and Bob Trumble from Williamsburg, Virginia. Bob teaches at VCU and he used to work at NIH and NSF. I’ve enjoyed spending time with them — they have been living here in Dublin. (Photo from 6 September 2012.)