In anticipation of retirement, our friend John Baird has decided to learn the art of traveling.  He’s starting small.

On Wednesday he called to say he’d be making the trip to our home in Portsmouth.  It’s a 5.5-hour drive from Blacksburg (my hometown and the place he lives) to our home in the Tidewater region of Virginia.  Dave, the cats, and I were all thrilled we’d get to see him!

John is Dave’s former boss and a groomsman in our 2001 wedding.  We were very happy to hear he was on the way, because we haven’t yet found time to make a trip to Blacksburg.

In anticipation of his arrival, I pulled out our wedding album.  While John was here we took a stroll down memory lane.

Dave and I haven’t viewed it for a decade.  When I received the proof prints the week after the weeding, I was disappointed with the quality of composition.

My mom, dad, and husband have all been professional photographers at some point in life.  I myself served as photography editor for my high school yearbook.  And so I resented the missing feet in our photos — and the fact that the photographer had chosen distracting backgrounds.

But what can you do at that point?  So I doled out photos from one set of proofs (to Mom, Annie, etc.) and placed the second set on a shelf.

From this experience, I garnered some helpful advice for people who are booking wedding photographers:  avoid bait-and-switch disappointment.  Be sure to specify in your contract which person you expect to show up at with a camera on the wedding day.  (Lucy/Matt and Dave/I each had the experience where we met with the owner of the photo business prior to our big day and liked her and her work.  BUT on the day of our weddings, an untrained photographer’s-husband showed up on each scene with not much clue about how to use a camera.  In both cases, the owner of our selected companies had booked multiple gigs. In reviewing our photos last night, Dave and I agreed we’d made out far better than Matt and Lucy.  Our husband-photographer wasn’t great, but also wasn’t anywhere near as bad as theirs.  Perhaps a little editing can alleviate my wedding-album angst.)

In any case, perusing the wedding photos was fun.  I enjoyed seeing much we/things have changed and how much we/they have stayed the same.  I’ve included a photo I took myself of the church where we married, on the campus of Hampton University.

As for our bridal party:  since November, I’ve gotten to see all but one of them!

It’s always a joy to see John.  We wish his wife Wendy would have made the trip, too, but she’s tied up right now, doing the agriculture research she so dearly loves.

John was Dave’s supervisor when they both worked as photographers for Virginia Tech.  For a few months before Dave moved here to Hampton Roads to be with me, Dave lived with John, Wendy, and their kids in Blacksburg.  The group of 5 Bairds took him in and treated him as a member of the family.

I’ve always admired the kids — Caitlin, Gillian, and Logan — for treating Dave like a brother.

Whenever we’ve visited Blacksburg since, we’ve stayed with John and Wendy in the beautiful home John designed and built on the side of a mountain near Ellet Valley.  Today the kids are spread out across the USA.  They live in NYC, Seattle, and DC.  Nevertheless, we’re sometimes lucky enough to be on the mountain when they are there, too.

And that, my friends, is a unique pleasure.  It has a certain feeling that I’ve found no where else and can’t really describe. Except perhaps to say:  it’s like getting to see inside a family that just loves being together.  Being there is something like watching the Waltons. Except in this case, we’re not watching on a TV screen.  We’re members of the clan, accepted almost as if we were Mary Ellen and Jim Bob.

During John’s overnight to the flatlands of Virginia, we went out for sushi and visited Dave’s studio and a company where Dave used to work (Superior Marble and Stone).  Then John hopped into his Honda for the trek home.

Our cats tend to behave like dogs — they follow us around the house and they run to the door to greet guests the moment one arrives.

Last night we had a cat in every lap… 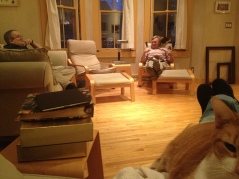 …and sometimes even two.

Sushi at Domo with Dave Chance and John Baird.

Pescia kept John company all morning. Although John declined bacon and eggs, he said he’d like one of what I was having… buckwheat groats with ground flax seed, raw pumpkin seeds, coconut oil, strawberries, and blueberries. Yum!