A dozen and a half owners of antique cars braved the frigid temperatures Sunday to show their treasures on Smithfield’s cobblestoned plaza. Among the collection were a couple cute old Minis and a dozen or so old Triumphs.

The photos below show my favorites from the show.  I love viewing early model autos!

Seeing them on Smithfield Plaza, an important industrial hub of 19th century Dublin, is all the more fun.

Here’s a quick glimpse into St. Stephen’s Green.  The squares and greens in Dublin are separated from the street by dense vegetation and high wrought iron fences.  That technique doesn’t work it the States, where such separations tend to yield dangerous spaces.  But here they seem safe enough (at least for me to occasionally pass through by myself at mid-day).

Due to the separation, the squares and greens are peaceful, quiet, and serene.  They offer respite from the hustle and bustle of the city.  Like New York’s Central Park, St. Stephen’s walled off Green was designed to be seen, not heard.  The views were designed to be “scenic” in the tradition of English landscape design (i.e., they were carefully composed for the visitor’s viewing pleasure).  St. Stephen’s Green is not a park for playing football/soccer or dodge ball.  Frederick Law Olmsted would probably not be pleased with all the sport that’s been carved into Central Park (it runs counter to his original intentions for serenity, visual perfection, and individual contemplation).

St. Stephen’s Green is often quite still.  And far fewer people go in than if the edges were transparent, “perforated,” or “porous.”

The Green is fine (and at times quite delightful) but I do quite prefer bustling, noisy, stone-paved plazas myself.  Dubliners, too, want urban spaces like that and many hope for the addition of new piazze (Italianate plazas) in the center of town.  They have only three to my recollection: Meeting House Square, Temple Bar Square, and Smithfield Plaza. The first two are quite small and the third is very large. It is, I’ve been told, the largest cobbled plaza in all of Europe.  (Or perhaps, just the longest?)

What Dublin lacks in piazze though, it makes up for in bustling pedestrian-only shopping streets. Dublin clearly has the corner on the market with regard to streets, with some of the finest pedestrian shopping streets to be found in the world (Grafton Street and Henry Street, for instance).

Cottage at the south east corner of St. Stephen’s Green.

A formal garden in the Green.

Workers re-shingling the roof of a garden pavilion. They said “hi!” 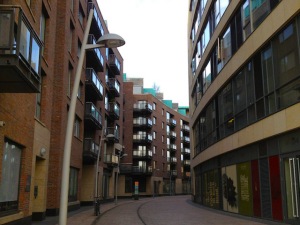 An impressive canyon-like space within a mix-use complex that was built during the economic boom (known as the Celtic Tiger).

Smithfield is home to some dramatic public spaces.  Most notably, there’s Europe’s largest cobblestone-paved plaza. Bordering this are circular spaces that make Swiss cheese of the Jameson Distillery (where the courtyards are even painted yellow) and the dramatic canyon opposite the plaza from it (see photo).

A lot of development happened in Smithfield during the economic boom known as the Celtic Tiger.  Today the apartments of Smithfield appear t be filled with residents — but many of the cultural, retail, and office spaces of Smithfield are vacant or under used.

I haven’t yet been to many of the highlights (such as the Lighthouse Cinema, the Smithfield Art Tunnel, the Generator Hostel, or the Maldron Hotel). But I have enjoyed my time at a number of the eateries as well as the Jameson Distillery, the Cobblestone, the Elbowroom (which is one of Smithfield’s many guys), and the Fresh Market.

Smithfield really doesn’t deserve the bad wrap it gets.  But as long as people have the perception that there might be something scary here, the rents will stay reasonable. And that part is fine by me! 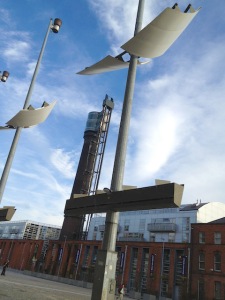 The old smokestack of the Jameson Distillery. 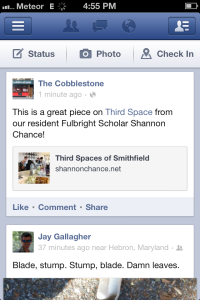 The Cobblestone made complimentary mention of an earlier blog on “third spaces,” so I’ve decided it’s time to write the sequel I promised.

A couple of weeks ago, after sequestering myself in my apartment for two days to write, I need a brief respite and some healthy food.  I headed to Third Space–Cafe and Social Space on the nearby Smithfield Plaza.

After placing an order at the counter, I realized I’d forgotten my wallet.  You see, I’d given a new purse a whirl the day before and accidentally left every cent in that handbag rather than the one I now carried.

The young man behind the counter could have easily cancelled the order.  He’d probably not even hit the enter key at that point.  But instead he said, “It’s okay.  You’ve been here before. You can pay later.”

Wow!  I’d been there twice.  Once was with Esther about four days prior.

This guy had rendered excellent service on that outing–and that was one reason I returned again so soon.

Now I’d normally have trouble accepting such an act of kindness, for fear something might go wrong.  But this time I admitted to myself that his was a much better option than trudging home hungry–particularly when I had so much to do.

So I stayed put and enjoyed a tasty slice of quiche with a side of grilled vegetables.

While eating, I devised a plan that required asking for more leeway than the kind cashier had actually offered.  When I got up to leave, I approached him and asked, “Is it okay if I come back to pay tomorrow morning? That way I can get breakfast while I’m here.  Will you be working tomorrow?”

He said yes and indicated the plan was acceptable. And I went on my merry way.

At home, I made sure to set an iPhone reminder.  I wouldn’t run the risk forgetting a responsibility as important as this.

I arrived back at Third Space around 8:30 the next morning.  After greeting the cashiers, I ordered a “mini veg” and asked to pay for both meals. The young woman who was ringing me up thanked me for returning to pay. And the young man was visibly relieved to see me.

“Isn’t it nice that we can trust each other?” he asked.

Yes, it surely is! 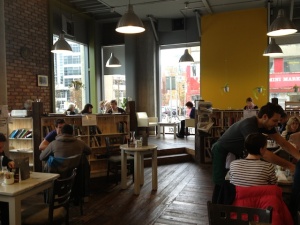 The Third Space offers shelves of books and an upper tier where the sign says, “here, it’s okay to talk to strangers.”

I must say, though, that he had to extend much more trust than I, since I know I’ll certainly follow through!  But what let him know I would?

In my mind, there was no way I would ever shake his faith in humanity by not meeting our agreement.  Such breaches have happened to me before, and the scars have left me far less generous to strangers than I’d like to be. But this particular story has a happy ending.

This young man has provided a glorious example of generosity.  He has demonstrated what a true “third space” is all about.

The website of the place he works, the “Third Space–Cafe and Social Space” claims that the founders wanted to provide a comfortable space for all, where people could feel included without having to spend much money.  This example proved to me that they have succeeded.