There’s a huge hurricane barreling toward the east coast of Virginia today. Everything there is closed and Dave is hunkered down at home with the kitties.  So that means he’s fixated on the computer screen for the day. Fortunately for my little workaholic, his power supply hasn’t gone out.

We live in the coastal area of Virginia, but our home is six blocks from the water. Since we’re on the mouth of the Elizabeth River rather than the ocean front, we’re not susceptible surges (historically speaking, that is). Our home isn’t in the “100 year flood plain,” although the ones on the next block are.

When Dave did leave home last night to grab sushi for dinner before the big part of the storm hit (that’s how people without kids prepare for a storm, by the way), he came home to find our cat Sienna asleep on his keyboard. He’d been keeping it nice and warm for her!

It’s very, very quite here in Dublin, too, and it feels a lot like hurricane days at home.

Here, it’s a “bank holiday.” Many places are closed. I haven’t left the house. In fact, I only stepped out twice in three days, and just for short jaunts (yoga and brunch).

The weather in Dublin is glum and drizzly. Which is actually okay, as I’ve spent the weekend working up lecture outlines, a Prezi file, a recommendation letter, and transcribing and making some progress on proposals for possible talks and exhibits.

If some of those come through, I’ll get to travel to “the Continent” to speak.  That will be fun!  I’m posting a memory from Rome to rekindle memories of a sunny day in Rome. I’ve been keeping up with the people who commented on the sketch via Facebook throughout the storm. Thankfully even the one who lives on the ocean front (Chris Bonney) is okay at this point. He’s still posting view of the storm…. 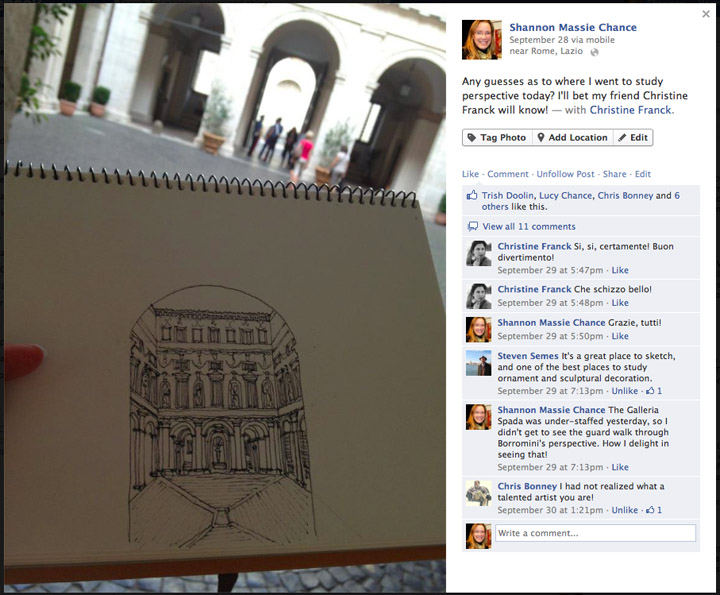 A sketch I made in the courtyard of Rome’s Spada Gallery, home to the famous Borromini perspective.