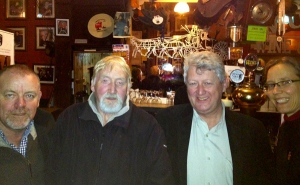 Kevin Donleavy  had written me to inquire about the plaque I mentioned in the blog post “Peace in Ireland.”  Last night I had the chance to learn a little more.

I was at the Cobblestone to meet Jerry regarding a little Christmas project we’ve got in the works.

And Fergus Whelan, the organizer of the December 1 event, happened to be there too.

The plaque, Fergus explained, was to honor Francis Hutchinson who was born in Northern Ireland but died in Dublin.  No grave marker had  ever been installed.

Plaque for Francis Hutcheson. Please click on the image to see a larger version. (Photo provided by Fergus Whelan.)

Fergus has righted this oversight.  A plaque now shines near the church on Mary Street in Dublin.  This group unveiled it on December 1, 2012 — the day I met them in the Cobblestone.

The December 1 events commemorated that remarkable man, Francis Hutchinson, who, among other things, influenced the American Declaration of Independence.  He did so via his friend Thomas Jefferson.  The plaque is well worth a read!

The December 1 event was so very striking, however, because the group of men gathered on that night had travelled down together in a single bus from Northern Ireland (where Hutchinson was born).  This morning Fergus sent me an email with photos, saying:

As explained the group shot are formers prisoners from both sides i.e. loyalist and republican. They came to Dublin to be present for the unveiling of the plaque.

Fergus asked these folks to travel down to Dublin together, on one bus, and to attend events together celebrating the life of Francis Hutchinson.  They put aside decades of ill will and united for this cause… because Fergus asked them to come.

I know this story will matter to Kevin Donleavy.  He has a similar project underway (that I’ll tell you about in due time).

What amazing experiences — sharing evenings with people who have such divergent points of view and yet finding unity within them. I’m thankful for Fulbright and thankful for my friends at the Cobblestone pub.

The group from the north of Ireland who came for the unveiling. (Photo provided by Fergus Whelan.)

Pat Goode singing at the Cobblestone after the plaque unveiling. (Photo provided by Fergus Whelan.)

Jerry learning to use ” ” in conversation last night. He still needs some work!

Jerry’s song “I could have been a giant said the bonsai tree….”