Kate Daly’s Pub proved to be a beacon of shelter in the storm. (Here’s a photo of it between yesterday’s hail storms.)

The interior offered a place to dry, warm, and calm myself (and my nerves — the hail had pelted me feircly). 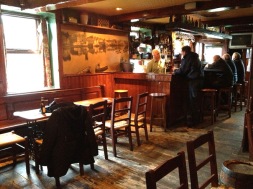 I sat by the fire… but on the way out I discovered good craic at the bar. 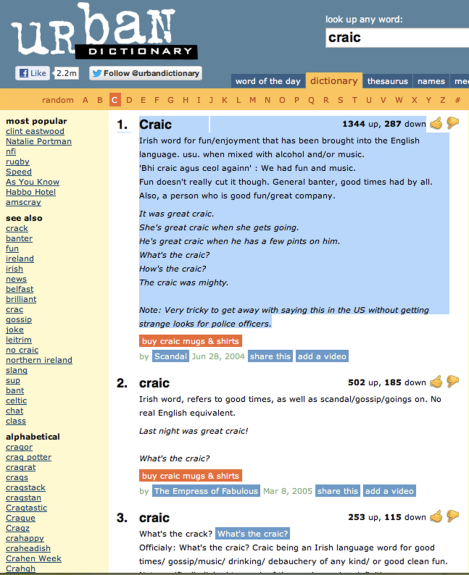 A recap regarding craic. (Downloaded from the Urban Dictionary.) 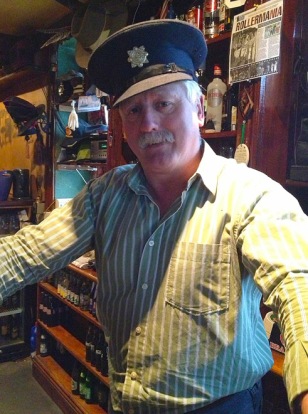 Tony was a police officer in Santa Barbara for years. Today he’s the barman at Kate Daly’s in Limerick.

The man in the front here is Welsh and is one of 22 kids (his mother bore 24 children and a whopping 22 of them lived). HIs son, in in the background, was born in Ireland of an Irish mother and is one of six kids; he says he has 80 first cousins!

I’d kept to myself yesterday when I arrived at Kate Daly’s pub.

When I entered, I was cold and drenched. The hail, rain, and wind had just pelted me into a corner of the castle wall (I was looking for an entrance, but alas the castle is completely closed for renovation). Finding no way in, I had little choice but turn back.  I’d snapped some images of Kate Daly’s pub before making that fateful turn toward the bridge off King’s Island. When I saw the pub, I mused to myself that people were drinking at this time of day, and I proceeded onward.  But after the pelting I’d just taken, the pub seemed to offer warmth and hope for survival.

But the place was warm and quite.  The men — all men — clustered around the bar were wide-eyed when I burst through the door.

I’d requested hot tea but was told they had none.  My purchase of a Blumer’s (by the bottle — a fairly costly choice), secured me a seat at the pub.  The bar man suggested I’d be comfortable by the fire.  I embraced the suggestion, peeled out of my wet outer garments, and made myself at home.

I sat there for a long, long while.  The faces people at the bar changed over time, but the composition and number remained steady.

With sun rays intermittently shining through the clouds (As they normally do in Ireland), I determined it was time to leave.  After all, I needed some food to offset the effects of that cider!

On the way to the door, however, the men at the bar posed a few friendly questions.

And that set things right — it’s not usual to leave a pub here without partaking in some friendly chatter.  I’d felt okay taking the role of a tourist today, but it didn’t seem entirely right given my interest in fitting in here.

So I jumped right in and enjoyed some craic.

And, boy, did I mean a host of characters!  The folks in the photos above were key players in the banter.  We had fun.

I eventually declined the (inevitable) offer of another drink and slipped out into a (different) moment of sunshine on my way to find food.  Before I found anything edible, however, I came across some picturesque reflections and  attended a lecture at the Hunt Museum on “upcycling” discarded items into artworks and usable objects. The lecture was sponsored by Limerick’s Tidy Towns committee and delivered by a woman named Mary (another Hail Mary I discovered yesterday in Limerick!).

I left Kate Daly’s pub and discovered this reflection just moments before my iPhone battery died. The blogging I did with in in Kate Daly’s drained it….