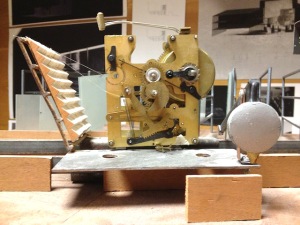 Funny that Gavin and I discussed diagramming gears  (an idea I brought up over lunch), then this model popped up at the Cork students’ exhibition.

I never know where I’ll end up when I leave the apartment.  Yesterday, after scintillating lunch conversation about Gavin’s thesis and a book proposal I am trying to develop, I hustled back across town to meet with architecture student leaders Colin and Andrew to discuss where our interests overlap.

They asked such great questions about the way we teach at Hampton University and the research I’m doing here. And, they asked me to be part of a day-long Schools of Thought symposium that they, the students, are organizing for the DIT School of Architecture.  In a couple of weeks, I’ll talk on the topic “Student-Centering Architectural Education: Revamping the Way We Learn and Teach.”

Andrew, Colin, and me at the Sab Inn Cafe (it’s the one I refer to as the Hungarian restaurant but the students call the red cafe). The owner gave us complimentary desserts to go with our tea! He’s such a doll!

I’ll get to help spread innovative ideas–that have been implemented by Gavin and his colleagues–with the architecture faculty and students.  I’ll also share the things Michael Seymour and I found in our survey of student preferences.

Colin and Andrew mentioned I might want to stop by the “darc space gallery” where the School of Architecture at Cork was exhibiting fifth year projects.  Finding that gallery was harder than you’d think.  Google had it listed as being on South Great George’s Street, but it’s actually clear across town on NORTH Great George’s Street.

I hung in there, and when I finally arrived I found beautiful graphics, interesting design proposals for Istanbul (they reminded me very much of the work I did in architecture school in the early 90s), and many wonderful people to talk with.

Their primary teacher for the fifth year, Jason O’Shaughnessy, studied at the Architectural Association in Edinburgh, Scotland when Peter Eisenmann and Daniel Libeskind were teaching there (I was working on my Master’s at Virginia Tech at the time). Any way, the influence of Eisenmann and Libeskind is quite clear in the students’ work.  They say the spent the four years leading up to this designing buildings with very typical sorts of programs, such as schools.

Jason O’Shaughnessy actually insisted that I guess his last name.  It took a while, but I finally succeeded. His only clues were that it was “the most Irish last name,” and that I was on the right track with O’Sullivan. Whew!

I had a ball talking with Helen (who works in TV and film production in Dublin) and David (an architecture student from the DIT).

During the event, I particularly enjoyed speaking with David (a DIT student who I heard speak several weeks ago as an opening act for the featured lecturer), his girlfriend Helen, and another colleague of David’s from the DIT.

They expressed astonishment when I said I could happily live here in Dublin for the rest of my life.  People here have no difficulty conceiving of emigrating OUT, but they don’t assume others would want to immigrate IN.  That, despite the fact that hundreds of thousands of people did just that–move in–during the Celtic Tiger (and most stayed, happily).

The exhibit was titled “Istanbul: The City as Palimpsest.”

Exhibition of work from Master’s of Architecture students from Cork.

The exhibit was held in an architects office, in its “darc space gallery.”

Funny that Gavin and I discussed diagramming gears today (an idea I brought up and wouldn’t let go), then this model popped up at the Cork students’ exhibition. 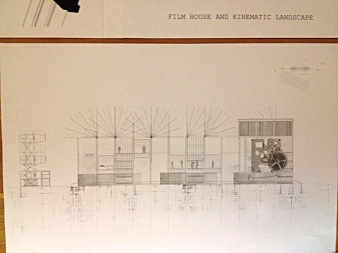 A drawing for the project that used the gears.

Perspective drawing from the gear project. 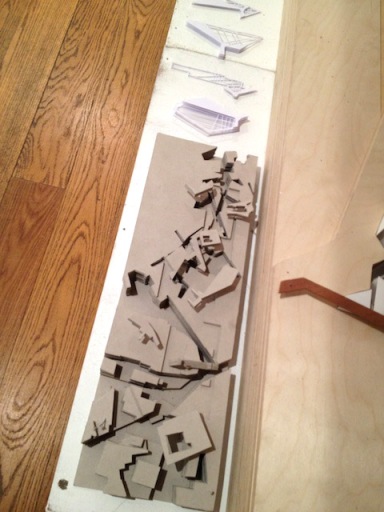 They cut the layers by hand, just like I did in school. No laser cutter short cuts here….

A beautiful graphic depiction of a building designed by a student from Cork.

Andrew, Colin, and me at the Sab Inn Cafe (it’s the one I refer to as the Hungarian restaurant but the students call the red cafe). The owner gave us complimentary desserts to go with our tea! He’s such a doll! 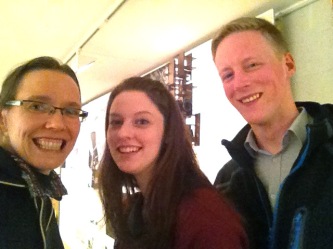 I had a ball talking with Helen (who works in TV and film production in Dublin) and David (an architecture student from the DIT).