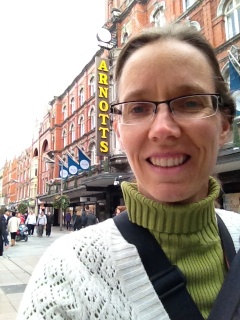 I had to ease myself back into reality a little today.  Tomorrow will bring the first day of classes at Dublin Institute of Technology!  I’ll be resuming work on my research project: meeting with my collaborators at DIT, settling into an office, and hopefully securing a library card and putting it to good use.

I did some work today to gear up.  Although I didn’t complete as much as I’d intended, I did get moving in the right direction.

I also forced myself to start using the kitchen in my apartment… which means that I discovered all kinds of things I’ll need in order to accomplish any degree of cooking here.

Up until now, Dave and I have been living like we’re on holiday (and eating out for every meal!?!!).  We hadn’t really gotten to see tourist sights when we were here in March 2011 and March 2012 because I was busy laying groundwork for the upcoming project.  We’ve tried to make up for that oversight by spending quality time together before our fall schedules consume us.  Dave and I throughly enjoyed exploring Dublin and “beyond the Pale” (the Pale being Dublin).  I’ll soon post more about what we’ve seen.

Over the past three weeks, Dave and I also put a lot of effort into creating our home away from home.  Nevertheless, today’s foray into the kitchen revealed the need for yet another shopping trip.  And fortunately, great shopping is just a few blocks away! 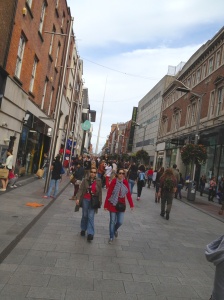 I must note, though, that great restaurants (like Mulligan’s Grocer and Seven Social and Cinnamon Cafe) are just as close.  Will power is going to be a critical aspect of eating at home.  In any case, I was very hungry today since I also took my first yoga class in Dublin.  I’d registered online last night with The Elbowroom (which is also just three blocks away) and ventured there for class this morning.

After class, I wrapped up some final editing for a journal article that’s “in press” and I sent everything off to the editors.  Then I headed out for kitchen supplies.  In this blog, I’ve posted images I took after I was loaded down with purchases — which was exactly when it dawned on me that you’d probably never imagined shopping like this.  Shopping here is so very different than shopping at home (with a car and with a sea of asphalt and plastic shopping bags).  Here, I have to carry everything back to the apartment… on my own back.

You’ll notice (in the top photo) that I’m covered with straps.  They’re from the Envirosax bags I tote along with me everywhere I go.  In Europe, you bring your own bags to the store with you.  Many department stores here are happy to supply bags, but grocers and discounters (like IKEA and Argos) charge extra for bags.

Moving on to evening hours:  since I don’t have a TV (by choice) and (sadly) couldn’t watch Downtown Abbey, I opted for a play at the Dublin Fringe Festival.  It was a superb two-woman play called “Payback!” at Bewley’s Cafe Theatre on Grafton Street.  Tickets are just 10 Euro each — a real bargain!

I couldn’t take photos of this play, so I’ll explain the image (I posted previously) from a Fringe Festival play I saw with my sister Heather.  That play allowed photography because it was an outdoor production billed as “boutique street theater.”

Play I saw with my sis at the Dublin Fringe Festival.

It was a very high quality production, lots of fun, and absolutely free!  I enjoyed it immensely even though I didn’t know most of the theatrical references (including A Midsummer Night’s Dream and Alice in Wonderland… I’m quite rusty with regard to both).

Thanks to my sis for helping me realize that Dublin theater is phenomenal, not to be missed, and not all that intimidating.  Now I’m gaining skill at selecting and booking tickets.  I’ve already purchased a ticket for a play in the upcoming Dublin Theater Festival — which is completely different from the Fringe festival that is currently underway.