Dublin was awash in sunshine today!

We awoke this morning for breakfast with two of our house guests–Amanda Bernhard and Jonathan Kennedy–who are in Galway for the year studying Irish.  They have a very interesting blog going and they manage to post it in Irish and English.  I invited them to stay an extra night after the Fulbright Orientation, so we could go to the Cobblestone Pub that’s just down the street.  It’s known far and wide as the best place in Dublin to hear traditional music.  Amanda and Jon each play instruments and they joined in with the other musicians playing at the pub last night.  I’m hoping Dave will provide images of Amanda with her fiddle and Jon with his pipes, so I can post them for you.

We are absolutely loving city life.  Everything is right here… no need for a car day-to-day. 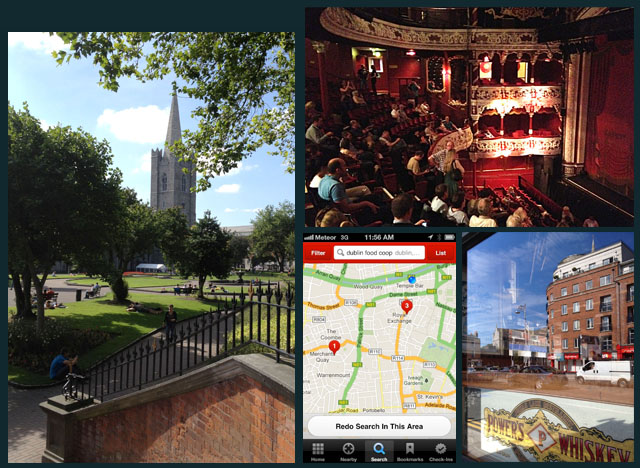 Following breakfast (which included a tasty bowl of porridge with rhubarb at the Cinnamon Cafe), I visited a photo exhibit while Dave enjoyed the weekly outdoor market and the wine festival in Meeting House Square.  Then we both headed over to the Oxfam Home store (which sells used furniture) and the Dublin Food CoOp.  Yelp has proven quite helpful in locating local favorites such as these, which came highly recommended by Peter and Mark at Kildare Street Hotel.

As we ran our errands, we also stubbled across one beautiful place after another.  I’ve attached a snapshot of the park beside St. Patrick’s Cathedral that we strolled through.

After a quick bowl of soup for lunch, I dashed off to see a play with my sister, Heather Massie, who is visiting for the Dublin Fringe Festival.  The play “Guerrilla Days in Ireland” was performed at the beautiful Olympia Theater.  It was a nice complement to the play we’d each seen last week called “The Plough and the Stars.”  Both relay twentieth century Irish history.

Amazingly, Heather has seen ten shows in the week she’s been here–in addition to taking a bus trip to Kerry, meeting us in Galway and Connemara for three days, and coming along on one day of Fulbright orientation with me (to see the Hill of Tara and Trim Castle).  Today she visited the Goal (former jail), art museum and its gardens, the Queen of Tarts….

In other words, it’s been quite a busy week.  I’ve just reported about the tip of the iceberg!  I’ll have to tell you about our other adventures in future days.  I do enjoy the comments you post and emails you send….