It’s overcast in Dublin today, so I’m pulling out some images from a recent sunny Sunday in nearby Dún Laoghaire, a  town in the suburbs of Dublin.

Dún Laoghaire is accessible from Dublin city center by train and bus, and it makes a lovely day trip. On the weekend, “Peoples Park” is full of market stalls and vendors with prepared food, raw ingredients for purchase, crafts, and other quality goods. The water front, with its harbor and beach, provides a relaxing place to stroll.

Dún Laoghaire is a town on the east coast of Ireland, about seven miles (11km) south of the capital Dublin. Its focal point is a splendid harbour and the town is surrounded by spectacular rolling hills.

…Historically Dún Laoghaire has always been a ‘Gateway to Ireland’, Dún Laoghaire gets its name from the Irish translation Fort (Dún) of Laoghaire. It was once the seat of King Laoghaire, the ancient High King of Ireland before the Vikings sailed from Scandinavia and established themselves in Dublin. 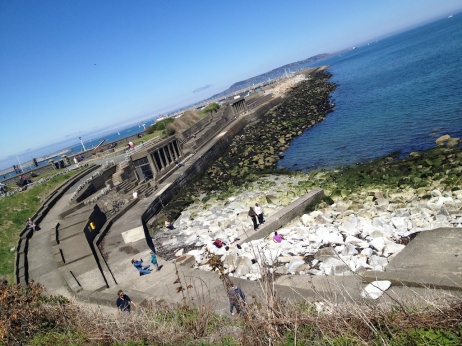 Dun Laoghaire beach with a view over to Howth (the peninsula on the left of the image, past the end of the pier).