It’s been a week of new adventures.  Last Monday my plane landed in Dublin and I began a new job at the Dublin Institute of Technology as a Marie Curie Research Fellow.  This is a two-year post funded by a generous grant from the European Union that will allow me to extend the research I began as a Fulbright scholar.  I spent several months last summer going the proposal, and met with success.

Many people helped with the proposal, including my mentor Dr. Nancy Stenson.  She has been a Marie Curie International Incoming Fellow (IIF) for the past two years… she told me of the IIF program, encouraged me to apply, and helped edit and refine my proposal.  Without her, I’d never have succeeded.  Jean Cahil, Jennifer Brennan, and Marek Rebow were also instrumental in the effort.  Colleen Dube, Pamela Eddy, Mike Murphy, John Donovan, and Brian Bowe provided valubale assistance as well.

Brian will be serving as my research supervisor for the next two years. Receiving this grant helped focus efforts in the college on the topic of research in engineering education. It lead to the formal establishment of CREATE (Centre for Research on Engineering, Architecture, and Technology Education, or something similar).

I’ll tell you about my recent adventures in an upcoming post….

On my last night in Dublin, my friends came together at the Cobblestone for my “American wake”.

Sheila Whelan (Fergus’ wife) originally suggested the idea.  She told me that when someone leaves Ireland for the US, the Irish traditionally hold a wake for them. In older days when people, like my great-grand mother, set sail for the States, a wake was held since the person wasn’t expected to return. Thankfully, flying has made the return trip much easier!

When I explained I wanted to return, Sheila said, “no worries!”  Evidently, my return  will give us a reason for a welcome back party!  I’m hoping for one of those on my November visit.

The Cobblestone pub in broad daylight.

Irish wakes are typically held when someone dies, and they celebrate the deceased person’s life. There’s lots of drinking, craic/merry-making, and music. They are similar to America wakes, which are held for the living. As explained on Wikipedia, the term American wake:

refers to a gathering in an Irish home the night before a family member emigrated to America, in which friends and family would say goodbye to the emigrant for what was probably the last time.

American Wake is the first full-length solo album by Patrick Clifford, released in 2010.

Thanks to my many friends who came to the wake, and to others who sent well-wishes from their summer vacation destinations. 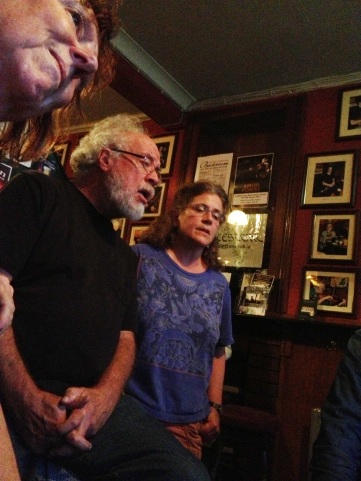 Nancy Stenson and her friends from Minnesota, John and Robin. 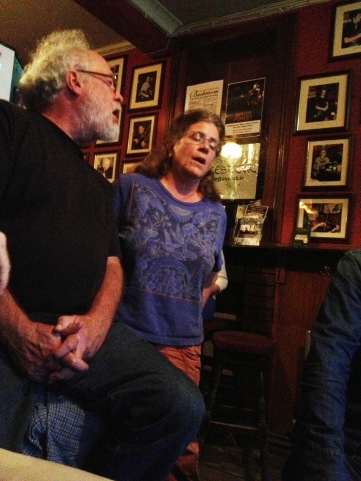 John and Robin sang a number of songs at my “American wake.” They were headed home the next day, too.

Robin, John, Nancy, and Fergus in the musician’s corner for the Wednesday night early set.

Here are my new friends, Sylvia and Alessandro, who also play on Wednesdays.

Tom and Tomas Mulligan, dancing behind the bar.

Eventually Jerry Crilly arrived, and shortly after that Frank and Carmel Cullen came around.

We moved to the back of the bar…

…so we could chat…

…and sing some songs.

Here, Jerry is leading a song.

And Fergus keeps everyone up-to-date on historical research.

Tom Mulligan gives us all a place to gather…

Here Tom and I are, posing with the “urban reflection” photo I gave him. 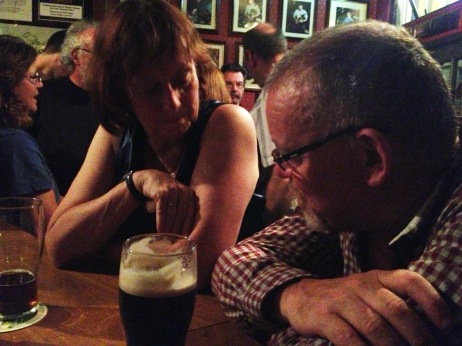 This wake was a wonderful way to wrap up a year in Dublin: at the Cobblestone pub with some of my best friends in the city. Thanks to them all for their love and support.