Are you an aspiring Fulbright scholar?  This year’s call for applicants is open!

The competition for the Core Fulbright U.S. Scholar Program for the academic year 2015-2016 will be opening in a matter of days.  Be sure to consult the IIE/CIES website (www.cies.org) for complete award information.  Please also note that CIES will be opening its webinar series this Thursday (January 30) at 2:00 PM EST with “What’s Fulbright?,” a presentation on the Scholar Program in general [note from Shannon: you should be able to find this in the archives since it already happened]. That will be followed on Wednesday (February 5) at 2:00 PM EST with “What’s New?,” a presentation on 2015-2016 competition highlighting new awards, program innovations and other areas of interest.  As always, be sure to note that the competition deadline will be Friday (1 August 2014). We look forward to seeing you.
Best wishes,

For the first time ever Dublin Institute of Technology (DIT) has been listed in Essential Science Indicators. More impressively, the institution achieved a listing in the top 1% in the world in the areas of Engineering and Agricultural Sciences (which includes Environmental Science)!

I’m hoping that my efforts here contributed in some small way to this achievement — I’ll have to see if any of the conference papers I’ve authored with DIT colleagues while I have been a Fulbright Scholar here at DIT  counted in this ranking. 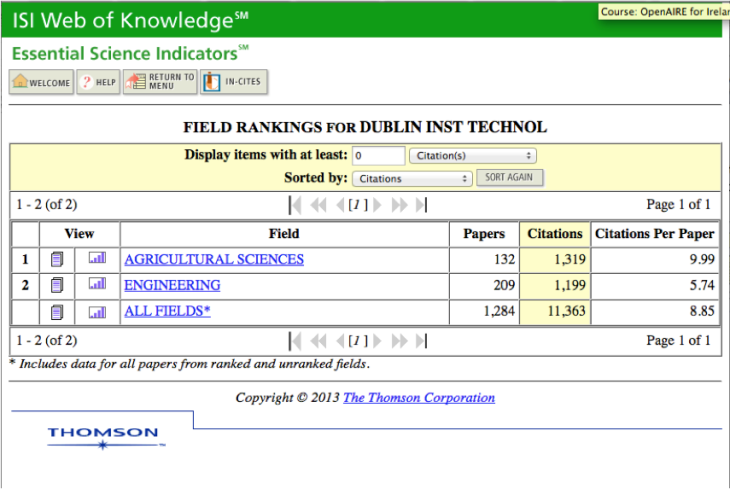 YouTube video of interview with Ali of Fulbright Belgium.

The Fulbright staff in Belgium interviewed me during my visit.  They asked me to describe some of my experiences with the program and explain how I got involved in it.

And, I hope my friends will enjoy hearing about what I was up to during my recent travels in Portugal and Belgium as well.

You’ll recall that the National Library was on the blog post I made for Kitty Lee.  It was among the things I wanted to see but hadn’t yet.

My recent visitor, Pam Eddy, used to enjoy going there when she was a Fulbright scholar to Ireland in the spring of 2009.  She knew the ropes of getting in and around the place, and that made it easier for me to jump in and enjoy being there.  (I’ll admit I’d been a bit intimidated by the place before going there with her.)

We viewed an exhibition of W. E. B Yeats, stowed our bags in the handy (all glass) lockers, and proceeded into the grand reading hall.  I’ve posted a host of images to show you the grandeur or the hall and the entry procession leading to it.

Photos outside the National Library show the exact same scene a century ago.

Pam and I signed in…

…and looked around the formal reading room.

It doesn’t look so different today…

…than in this old photograph.

The ceiling is beautiful and the space filled with natural light.

The furnishing are from days past… 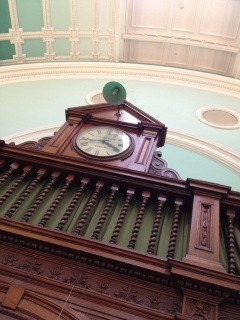 …and word work from a time when craft was highly valued. 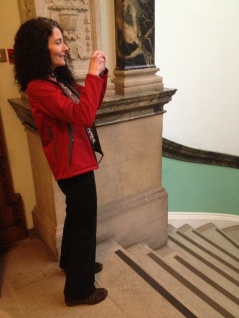 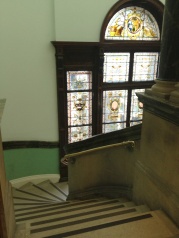 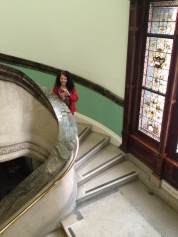 …and then found our way back to the door. Perhaps next time we’ll bring some work to do in the stillness of this grand place.

Because I blog about the experiences I’m having much more often than about than the research I’ve been doing, people sometimes ask me if I’ve been getting any work done at all.  The answer is, emphatically, YES!

The Fulbright program IS about doing scholarly work.  But it’s also about learning. It’s about making the space in our lives to get to know other people and how they do things… to remove ourselves from the ordinary humdrum long enough to learn something that’s radically new to us as Americans, but not new at all in other places.

Fulbright scholars DO have lectures to give, papers to write, and projects to conduct.  But in the end, the most valuable part of our experiences overseas rests in the friendships we make and the respect we build for each other’s culture.  That, I see, as my primary mission.

This type of cultural give-and-take is evident in the images I brought back from Tanzania — so I’ve decided to share a few here. Most are from the 2005 Fulbright-Hays program I conducted for college students from the US and Tanzania. You can also read about a lecture I gave on the topic of African architecture.  I’ll be delivering that lecture again in Belgium this spring….

Kelly Thacker (a student who was studying student affairs in Kansas) learned about urban design by working Tanzanian and US architecture students. 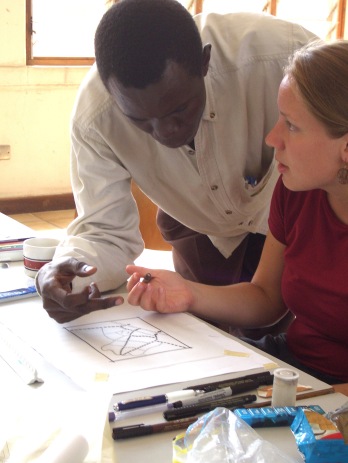 We worked inside the architecture building (shown here) at the College of Lands and Architectural Studies.

But we learned a world more about life than just urban design.

We learned how Tanzanians celebrate weddings and funerals.

How they care for their young and old people.

How they have built traditionally…

…and buried their dead. 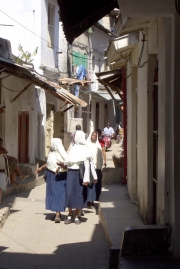 We saw Christians and Muslims living side by side in harmony.

And noticed differences and similarities in the way humans live. 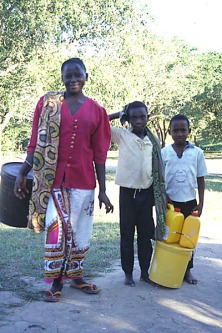 As one specific example, we developed new appreciation for the role of water in living, and… 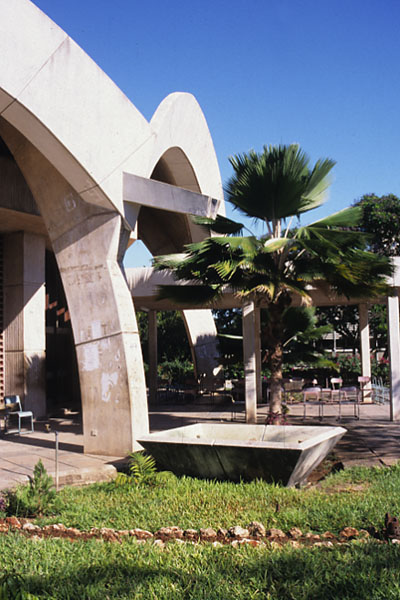 In 2008, Mom was a Fulbright scholar to Canada, hosted by McMaster University in Hamilton, Ontario.  Heather, Leslie, Dave, and I went there to spend Christmas with her.  Here are a couple of photos Mom took during our holiday outings. 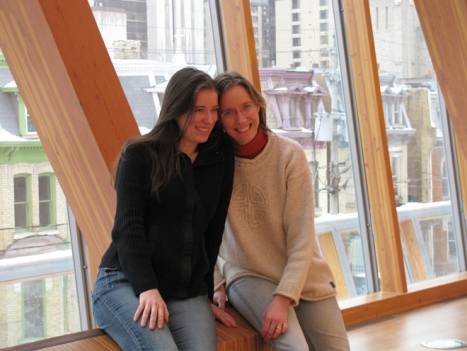 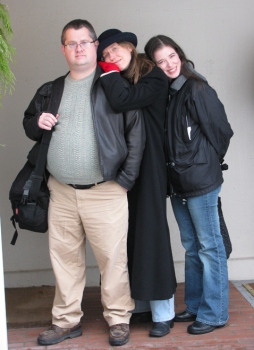 Dave, Shannon, and Heather outside castle in Canada.

It’s always fun to see who is tuning in to Ireland by Chance.

Viewing my statistics map in WordPress helps me assess how well I’m doing my duty as a Fulbright scholar, which I view as helping build and share cultural understanding.

WordPress tracks the number of clicks onto the site shannonchance.net. It’s maps don’t include the people who have the blog delivered to their email boxes, however.

The past couple of weeks, I’ve had far more visitors from Ireland than from home.

Thanks TC, Laurie, and Sima for visiting so often from Germany, France, and UK!  I can thank Esther’s family and friends (like Heidi) for putting Switzerland high on the list, too.

To all of you I don’t know yet, I hope you enjoy your visits and that I’ll get to know you somehow, someday! 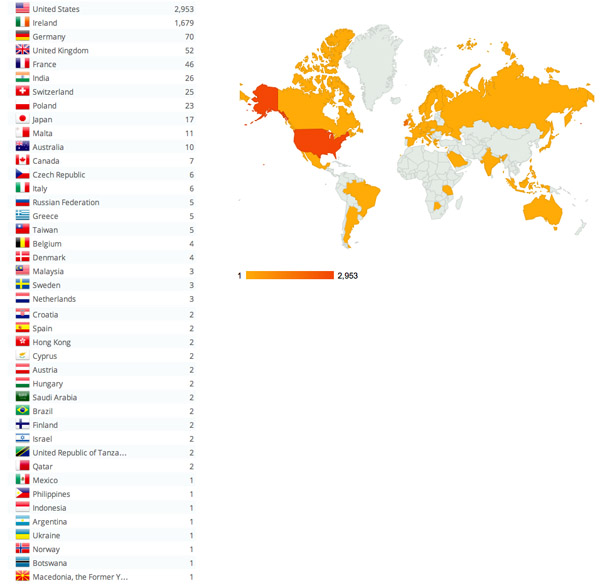